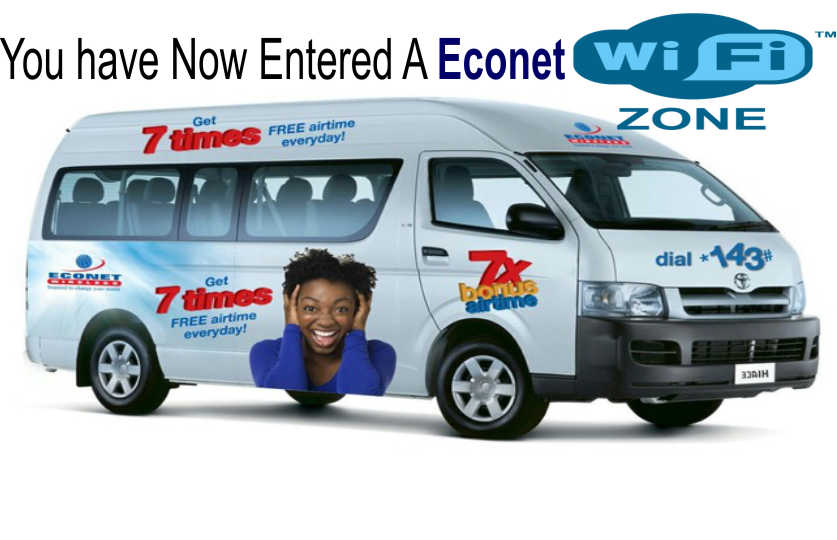 Econet wirelss forges ahead with its plan to improve connectivity in and around the country. The company will this month launch the pilot phase of the WiFi provision on the selected commuter mini-buses (combis). As part of a pilot phase, Wi-Fi will be installed on 100 mini buses, Techunzipped has learned.

During this test phase Econet hopes to take advantage of the 7x Promotion which last week added “free Wi-Fi MB” to every MB bought. Which means that if you buy 100 MB you will get 100 MB Wi-Fi bundles .The Wi-Fi in combos will first be tested on the various feeder routes across the country.

Speaking to a source close to the development, he said delivering free Wi-Fi connectivity in combi buses will permit commuters to be creative while traveling. They will be able to send e-mails, read the news, talk and engage in work and online social activities.

If the trial proves to be successful, Econet wireless will be looking at the possibility of extending the Wi-Fi-on-the-go service with country wide rollout, said our source.

We all consider Wi-Fi a blessing in the modern times. The wireless broadband market is becoming increasingly competitive, with almost every MNO/ISP having a Wi-Fi hotspot. As our need to get online has grown and, not coincidentally, mobile data services have faced an unprecedented capacity crunch and soaring prices, Zimbabwe Wi-Fi access has come on leaps and bounds. This is now a fact, the use of public Wi-Fi services will increase three times in 2016 than in 2014 or 2015.Need broadband internet access on the go or where a fixed line is unavailable? Wi-Fi is for you.