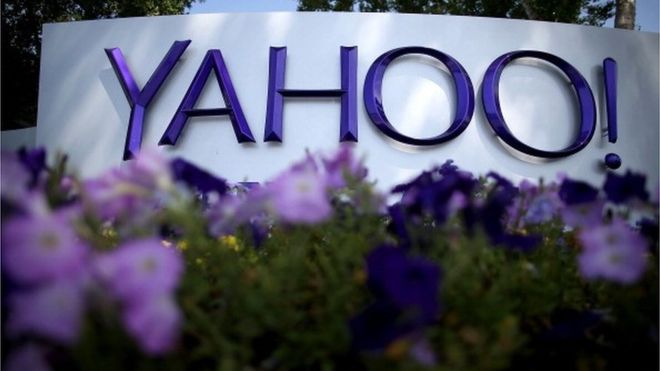 In the 2000 movie Frequency, a cross-time ham radio link connects father and son across 30 years. Along the way, our present day hero tells his childhood friend, “I want you to remember this word, OK? It’s kind of like a code word: Yahoo. Can you remember that?” His friend does, and because he invested in Yahoo, he becomes filthy rich. That was then. This is now.

Frequency Yahoo License Plate
When the movie Frequency was made, owning Yahoo was the way to riches. Now, not so much.

By December 1999, Yahoo stock was peaking at about $500 a share, or just over $108 a share after splitting. It was a monster company. Now, Verizon is buying Yahoo for the bargain basement price of $4.83bn in cash. Spoiler alert: I think they’re over-paying.

When Stanford University students Jerry Yang and David Filo created the proto-Yahoo in 1994 as “Jerry’s Guide to the World Wide Web,” it had no real competition. Yahoo rapidly became the search guide to the still-new web. By 1996, it had competition in the first, successful early search engines, Alta Vista and Excite, but they never came close to challenging Yahoo.

How did Yahoo do it? By investing in its web portal and, later, its search engine technology.

Verizon is buying Yahoo’s core business for $4.8 billion | Yahoo reports another big loss and Tumblr write-down | Meet the hacker who tries to break Yahoo every day | Microsoft to provide an assist to potential Yahoo buyers: Report | Why Yahoo is telling mobile users to forget their passwords

If you’d invested in Yahoo on day one, you would have seen your stock rise by 1,339.4 percent at its January 3, 2000 high. As the bubble grew ever bigger, Yahoo started what would prove a long history of bad acquisitions such as Broadcast.com and Geocities. Then came the dot-com crash.

Like so many other high-flying companies, Yahoo fell like a rock. Unlike many others, such as Pets.com, Curcat, and eToys, Yahoo survived.

Unfortunately for Yahoo, its nemesis, Google, had already been born. And Yahoo would continue to buy bad companies instead of investing in search engine engineering.

In the years after this, Yahoo steadied itself, but it was no longer a growth company. It was as if Yahoo went from being an up-and-coming young adult to retirement age in a blink of an eye. In the 2000s, Yahoo made only one truly successful move: it bought a stake in Alibaba. This company would prove to be China’s version of Amazon.

Ironically, in the last few years, this acquisition is the only thing that’s kept Yahoo afloat. Even so, the company has seen one disappointing quarter after another.

The patents include inventions used in the firm’s search technology.

Read More
Oh, and please note that Yahoo is not selling its Alibaba shares, its shares in Yahoo Japan, or Yahoo’s non-core patents (aka Excalibur portfolio). Those will continue to be held by a new, son-of-Yahoo company.

I could point at many bad moves Yahoo has made along the way. Among the low points were then-CEO Yang turning down Microsoft’s buyout offer of $44.6bn in 2008. Long-haul Yahoo stockholders must be sobbing in their beer now, and Microsoft stock owners must be breathing a big sigh of relief.

Even though Yahoo didn’t accept Microsoft’s buyout, the company still dumped its search engine for Microsoft’s Bing in July 2009. What were they thinking?

Finally, while a lot of people like to blame former Googler Marissa Mayer for Yahoo’s terminal decline, I always thought her hiring as CEO in 2012 was a smart move. I was wrong.

I now think that Yahoo had been rotting for years. It all started when Yahoo put acquisitions ahead of innovation in the dot-com days. Sure, the Alibaba stock buy worked out well, but that was the only acquisition that did. Flickr in 2005, and Tumblr in 2013, not so much.

And, mea culpa, Mayer didn’t change this. The theme throughout, no matter who was CEO, was that Yahoo kept trying to buy rather than develop its way out of trouble. Mayer kept on this course — a course that had been shown for over a decade to be a failing one.

Verizon now wants to see if it can make money via buying over development. Good luck with that.

As John Colley, professor of practice in the Strategy and International Business group at Warwick Business School, said: “Unfortunately ‘Alliances of the Weak’ in an attempt to make a single strong competitor very rarely work. They are usually left with a bigger ‘weak’ player. This seems likely with this tie-up in a market in which the ‘winner takes all’. If you are not in the top two then unless you have a credible niche you will suffer. Yahoo have struggled to gain traction and recent results have been particularly disappointing. Why should Verizon and the addition of AOL change that?”