Digital media is growing in leaps and bounds in Zimbabwe, seen by the number of people that now use the medium for daily content consumption e.g. news as people daily flock online news services for an updates  of the goings on locally, regionally and internationally.

This growth has not spared the business sector either as many people now use online platforms for trading purposes. There has been an explosion of online classifieds sites as enterprising young players seek to take into the online traffic and build businesses.

Deepleague  has by far the largest following on Social Media, with their facebook page currently sitting on 188 000 likes. The company also has a popular and highly active Facebook group called Deepleague Adverts Group with over 35 000 member, bringing  Deepleague’s total facebook fanbase to over 220 000 followers. This is by far the largest  that any classifieds site has in Zimbabwe.

Their nearest competitor is Zimbabwe’s oldest online classifieds site classifieds.co.zw, a webdev owned property, which has about 40 000 likes. Third is Ownai, the Econet wireless owned classifieds site which stands at 19 000. The other notable  player is Siyaso Market which has a following of 17 000.

When asked for actual website statistics players in this industry, as indeed many other online sites, tend to give variable numbers, some of which are frankly suspect.  A lot of them seem to give highly puffed up numbers just to boost their profile. No-one ever really reveals their stats and so we have to rely on Social Media following, which has visible likes, that can then give a picture of likely website traffic.

There is another classifieds called Zimbabwe Open Market, and though it seems  to be only focused on facebook, it has a healthy following of 79 000, making it the second most followed after Deepleague. 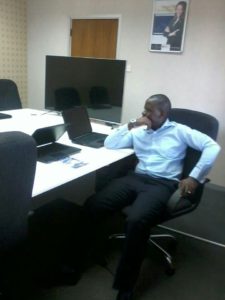 Sean Moyo, the Founder and CEO of Deepleague

When it comes to website traffic, it’s difficult ascertaining the real numbers, because the tendency to rely on word of mouth from site owners is really unreliable.  Even online statistics sites like Alexa, Similar web, Heatsync and others are also subjective in their classification. These sites tend to give favourable ratings to sites that would have subscribed and paid for monitoring, so they are also to a significant extent unreliable.

Unfortunately we couldn’t get through to Sean Moyo, the Founder and CEO of Deepleague as his phone was unreachable but the last time our reporter spoke to him ,he indicated that their website gets an average of 3600 unique visitors a day, while on a good day they can reach up to 5000 vistors.

He also said that Deepleague has a huge whatsapp subscriber base totalling aroung 45 000. These he said were mainly subscribers who use WhatsApp to receive Deepleague Property and Job updates. The Deepleague WhatsApp service is hugely popular especially in Harare, as Home and job seekers now rely on these services for updates.