When disaster strikes, sometimes the best move is a pivot.Rebranding has been the need of the hour for airlines on several occasions in the past, whether prompted by a tarnished image, a merger or a financial crisis.

Air Zimbabwe has just rebranded for the first time in over 37 years. The Old Air Zim logo of is gone, replaced by the black tale, with the Zimbabwe bird and red star. And every plane will be tagged with green, yellow ,red and black rings near the tail. Air Zimbabwe will be now be called Zimbabwe Airways.

There’s logic behind the decision: Air Zimbabwe signed an agreement with Malaysia Airlines to use their ex-planes which have been sitting after many months in storage.

The rebrand has even stretched to new livery on four of the Zimbabwe Airways planes. 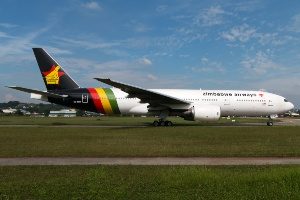 As of this writing only one ex-Malaysia Airline will see a new lease of life in Zimbabwe as Zimbabwe Airways. Many will have composite bodies that can’t be polished with the mirror shine of Zimbabwe Airways’ existing fleet. The look had to be reexamined for brand continuity, the 12.7 year old plane will be a great addition to the airline.

Clearly the issue isn’t the age of the plane, but rather that Air Zim just haven’t been focused on offering a competitive product. Well, it looks like that could finally change… or at least that’s what the rebranding is about.

No doubt, not everyone will like Air Zimbabwe’s reboot. The original brand has been dry as a bone into our consciousness for years. But as a Zimbabwean, I have to say, I greatly appreciate the rebranding of a parastatal which will ultimately represent my country, as a TV-loving society that likes to travel and makes a decent table.

Of course it’s what’s on the inside that counts, so what I really want to know is what the cabins will look like on Zimbabwe Airways’ “new planes”. Will their new “777s” finally feature competitive products, or the same product they have on their B737, which is extremely uncompetitive for long-haul flying? Then again, even that would be a huge improvement over what they have on their current A320.

Air  Zimbabwe’s management seems to suggest that they’re planning on a true revival:

According to an executive, the branding change is more than just a superficial renovation. Its resolution, they say, is to send a clear message to passengers, stakeholders and the community-at-large, that change is happening across and throughout the whole organization of the airline. To this end, the fresh, dynamic look will also be reflected in Zimbabwe Airways’ complete approach to delivering on all areas of “operational, commercial and service excellence”.