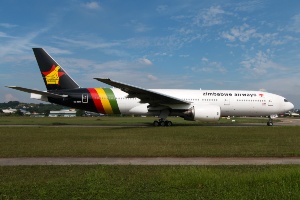 It never rains but pours for our beleaguered national carrier. As if it is not enough being snubbed by the majority of travelers who have a strong preference for the efficiency and effectiveness of using the skies to arrive at any destination, very soon the Zimbabwe Bird in disgust will also follow suit and eventually fly off the body of our national airline planes. If we continue taking things for granted, the Zimbabwe Bird will soon seek sanctuary at Great Zimbabwe.

Honestly, let me take a moment in all earnest to acknowledge the beauty of the Zimbabwe Bird, and we should all be hiding our faces in the sand with shame, because the level of embarrassment the Zimbabwe Bird has endured as a result of our inability to efficiently run an airline is beyond imagination, and we persist being a laughing stock in the skies.

For the benefit of those belonging to the younger generations, it is unfortunate that you have grown up in an environment that has robbed you of the basics that we of the older generations took for granted because of the good and exciting times we found ourselves navigating through.

Memories of my very first trip as a primary schoolboy to Harare Airport as it was formerly known then before being rechristened as Harare International Airport have never left me to this day. I remember vividly how delighted we were to see the Zimbabwe Bird on something that could actually fly for a change, rather than our misplaced excitement of watching it fly on a plane in our textbook pages, whose sight we could only marvel at after turning the page.

Our great excitement and delight became a catalyst for some really wild dreams of one-day becoming pilots and air hostesses; let me hastily mention that, none of those dreams amongst my former classmates have really materialized to this day. As for me, my dream of boring people out of their brains with my writings actually materialized, and proudly up until now, some find it prudent to waste their precious time setting their eyeballs on my murmurings, which I greatly and profoundly appreciate.

During our tour, we were informed by our tour guide that the direct flights between Harare and Heathrow were the two most profitable flights for our national carrier back then. Don’t wipe your eyes, you have seen correctly, as once upon a time Air Zimbabwe had direct flights between Harare and London, and that was the cash cow for the airline. The national airline was competing with British Airways for relevance on this lucrative route. Anyway, that is now folklore tales.

Today, the airline is just a miserable shadow of its former self. Whilst back then we were met by a highly motivated staff, the highest probability is that not only will you meet a disoriented and disillusioned staff today, the chances of seeing an Air Zimbabwe plane that can invoke any wild dreams like what happened to most of us decades ago, are next to zero.

Not that it really matters, the national carrier even had a well-funded football team that can make claims to have been successful in its own right by using its own yardstick of success, as two prominent former footballers found their way to Europe, after being on the books of the team at some point earlier in their careers.

Doing the rounds on social media is a contribution supposedly made by Member of Parliament (MP) for Norton, Honourable Temba Mliswa in Parliament this past week. Let me state that I tried to verify the authenticity of the contribution, however, it is never easy to verify such things if you are not heavily connected in political circles, and unfortunately, I couldn’t verify it.

Anyway, authentic or not doesn’t really matter much in relation to Air Zimbabwe, because it is public knowledge that the entity is a dead man trying to walk with the living. And the contribution attributed to the Honourable MP got me seriously thinking about whether Air Zimbabwe can seriously be turned around.

According to the Honourable MP, the Auditor General has already declared the national airline a dead donkey which made its last kick ages ago, and the Minister of Transport and Infrastructural Development who happens to be in-charge of its parent ministry is in agreement.

Curiously, the MP mentions that national treasury through the Minister of Finance and Economic Development presented a report about the performance of parastatals, and unfortunately there is no light at the end of the tunnel if the status quo persists.

Now, the big question that the Honourable MP asked on behalf of all sane people is why these state owned companies still continue to be allocated money when the funds are never accounted for.

Furthermore, still, on behalf of all sane people, his million dollar question was whether the minister could make it public knowledge how much money parastatals are expected to make from the $220 million that was being allocated to them.

Hypothetically for illustration purposes only, let us assume Air Zimbabwe will get $50 million from that allocation, does it really need the cash injection when its obituaries have already been written? Two ministers supposedly involved in the bigger scheme of things are in agreement with the verdict by the Auditor General, and yet their actions say otherwise, it’s simply scary and mind-boggling times ahead.

In my humble opinion, Air Zimbabwe doesn’t need money, it is only crying out loudly for visionary leadership that is exempt from political interference. A lot of millions have already been injected and can’t be accounted for; therefore money has already proved not to be the solution for the airline. The airline needs to rid itself of political appointees or apologists, and be run by professionals with proven track records of running airlines or big business that had gone off the rails.

To get itself out of its current mess the airline needs to be led by people with a start-up mentality. Only frugality will get it over the hill, because once a startup mentality is allowed to resonate amongst the rank and file within the organization, only then, can operational efficiency be improved. Air Zimbabwe simply has to start from where it is today.

Rebranding as a strategy is a weak idea to use for addressing the issues bedeviling the national airline and an unnecessary abuse of limited financial resources. So much money has gone down the drain ever since someone devised throwing money at the problems at Air Zimbabwe as a strategy. In the history of the company, this is the worst strategy ever approved by a group of people given responsibility to oversee the running of the enterprise.

Therefore, what is required is a visionary leader who has a clear vision and precise action plans that can be very relevant in trying to turn around the airline. The objectives and goals should be measurable, have a time frame and achievable. The planes are there as per the contribution of the MP, therefore, the starting point should be identifying routes that could be lucrative and profitable, and analyze how best to serve those routes.

Customer service is another pain point that needs to be improved quickly. Although Air Zimbabwe during its heydays provided a customer service experience that was envied by a few notable airlines, it has greatly fallen behind the pack in that regard. Staff training on customer service is essential, because even though the company has a battered image there are those still sentimentally attached to it, and those are the ones it should start by trying to make its cheerleaders by providing a customer service worth their sentimental attachment.

Time management by the airline is another issue of great distress for Air Zimbabwe customers. Arriving and departing on time barring unforeseen circumstances don’t require money to be injected into a business. It is a matter principle that an airline should stick to the times it gives passengers. Travelers choose this mode of transport because of the convenience that it offers them. The airline needs to go the extra mile in ensuring that passengers don’t endure unnecessary flight delays.

The moment word reaches so many ears that Air Zimbabwe has finally turned a new leaf and is now managing its operations efficiently; travelers will slowly start making bookings with the national carrier. It is necessary for the airline to explore budget routes that it can be profitable on to augment the income from its long-haul planes.

There is need to invest heavily in the development and design of a functional website that has a booking system that actually works. A lot of effort needs to be put into updating the website too. In that sphere, Air Zimbabwe is a real joke, and travelers can never be expected to take it seriously when the company doesn’t really care about its image. For all the millions of dollars poured into the coffers of the national airline over the years, it is still beyond belief that a few thousand dollars to develop a functional website and purchasing a booking system couldn’t be spared.

Technology has moved on such that even having more airplanes than everyone else without a functional website is no longer a competitive advantage, it is just similar to having a Ferrari that has one tyre missing, totally hopeless. The internet offers people abundant choices with just a click of a mouse, and nobody still wants to visit company offices when there are so many things wrestling for their time and attention.

In conclusion, there is a lot of work that needs to be done at Air Zimbabwe before we even start talking about if it is on its way back to rediscovering its former self. In addition, mentioned above are some of the sticking points that need immediate attention before the airline can even dream of attracting passengers as it used to effortlessly do during its glory days. Besides, treasury can continue to pour millions into the airline, nevertheless, without a proper rethink of how to make the national carrier operationally efficient once again, those millions are better off being used to improve our health delivery system. At the end of the day, we are now running the risk of infuriating the Zimbabwe Bird beyond reproach.

The Relationship Conundrum In A Broken System
Is Zimbabwe Turning Into ‘Gig Economy’?