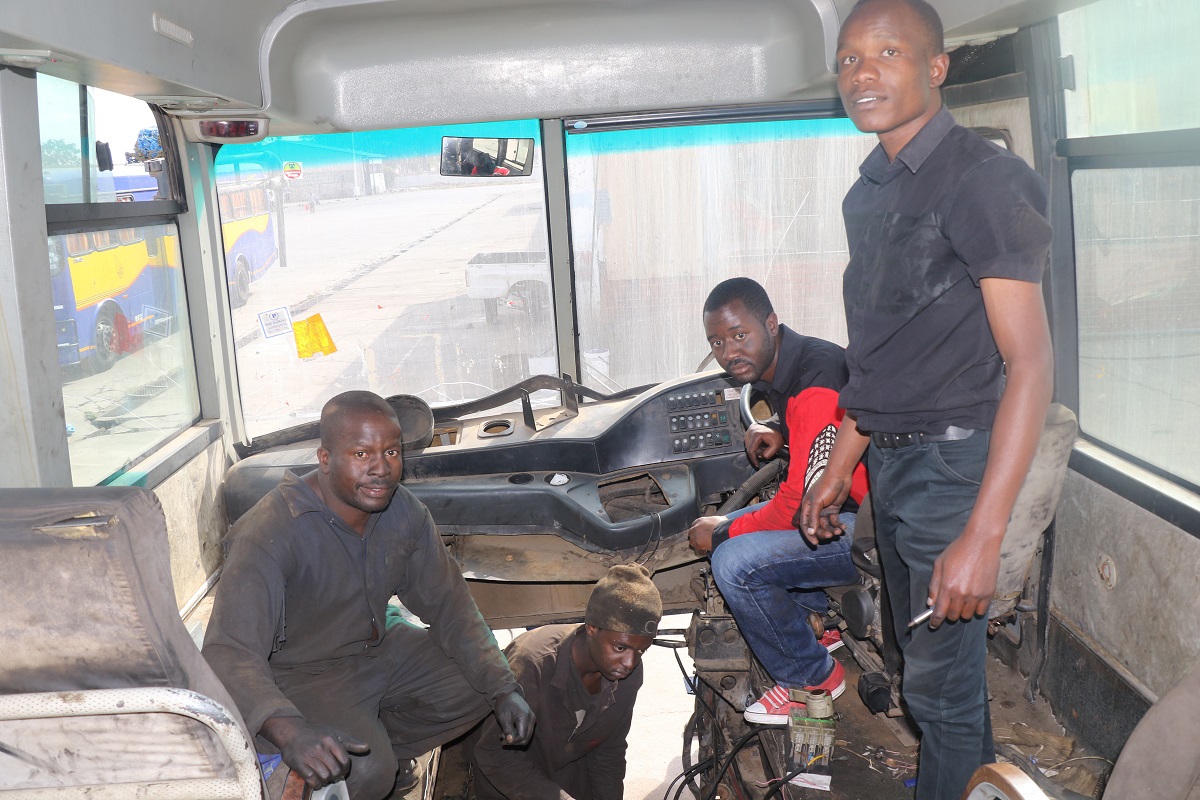 Zimbabwe Students are developing an electric-powered bus which has no sound pollution, economic to the citizens of Zimbabwe and an innovation that makes it easy to be time oriented in terms of route schedules timetables. This has been depicted as a good initiative in countries which are developing especially in Africa.

Frank Mazvuru, Wilfred Pondiwa, and Anesu Mutsvangwa came up with this brilliant idea in 2006 at Sandringham High school.

“We designed and made a remote controlled car toy at the science lab that worked with batteries and we were in Form One at that time. The toy raised questions in our mindsets why it wasn’t possible to have cars and buses that would work without diesel and petrol. We were young and eager to research more. As years passed, we had answers to our throbbing questions concerning our electric bus idea. In 2014 we started to do a deeper analysis of our vision and that’s when we began to see the hope that surrounded the vision.

On 16 June 2017, the trio approached Zimbabwe Passenger Company Ltd (ZUPCO) and explained to them their vision.

Surprisingly, the CEO Mr C. Muwoni gave them a commitment letter that stated that ZUPCO was to assist them with a shell bus and workshop facility for a period of 3 weeks for their electric powered bus experiment.

This was a huge step towards realizing their vision and they were extremely grateful.

As students, Frank, Wilfred, and Anesu had no money to buy a 100-150 m long 400 AMP armored cable, to hire a 300 Hp or 400Hp three-phase electric motor, Variable Frequency Drive (V.F.D) and other components to be used for tests. This compelled them to approach the Ministry of Youth, Indigenization and Economic Empowerment and they were welcomed very well.

The Trio said: “We explained our idea to them and they greatly appreciated our vision. They greatly indicated to us that they wanted to support us but they had no money at the moment. They referred us to several microfinance banks with their letter of assistance that fully stated that they wanted to support us, for example, Lion Microfinance. We were assured to have the money to further our idea by the loan officers. We squeezed from our dry pockets to get $15 that they requested from us to have registered for their loan applications.”

According to the trio, the loan officer said that it would not take less than 2 weeks for their response, surprisingly.

The trio said “We went back to the Ministry of Youth, Indigenization and Economic Empowerment to report back how we had tried to source funds and failed, luckily they had a great opportunity for us in which we could use to further our vision. They offered us an opportunity to showcase our electric powered bus using visual ads since the space they had for us was indoors at the Harare Agricultural show.”

“On 18 August we started doing our project tests. We had to assemble a bus from the scrap, with the help from attachees from Kushinga Philekela Polytechnic namely Cosmas Pasi and Farai Mutakiwa at ZUPCO Depot Gleneagles” they added.

During the research, they looked at the economic aspect of countries especially in Africa and they noticed that most African countries either assemble buses or import as there is no company that manufactures buses according to their research confined to the southern part of Africa.

According to the trio these buses are in service they are not given proper maintenance schedule, as a result, they end up being grounded. The fun part is that most if not all the gearboxes are functional but engines are dead. The shell can still be refurbished and the chassis still intact. Instead of seeing scrap buses, as students, we saw an investment opportunity. Instead of buying buses either diesel or electric from outside which is expensive, why not rebuild these scrap buses and modify them into electric ones.

Basically, the idea of electric buses is not new but then our trolley mechanism is different from the one that is being used in some countries.

In brief, the concept is not based on the electric motors it is based on the trolley mechanism that distributes power to the bus which the students claim is new.

Right now they have done the designs and are on the verge of patenting their idea through the National University of Science & Technology where they are currently students.

Upon patenting they plan to disclose the mechanism, and at the moment they have done all the paperwork including cash flow projections but upon agreement, they can disclose them.