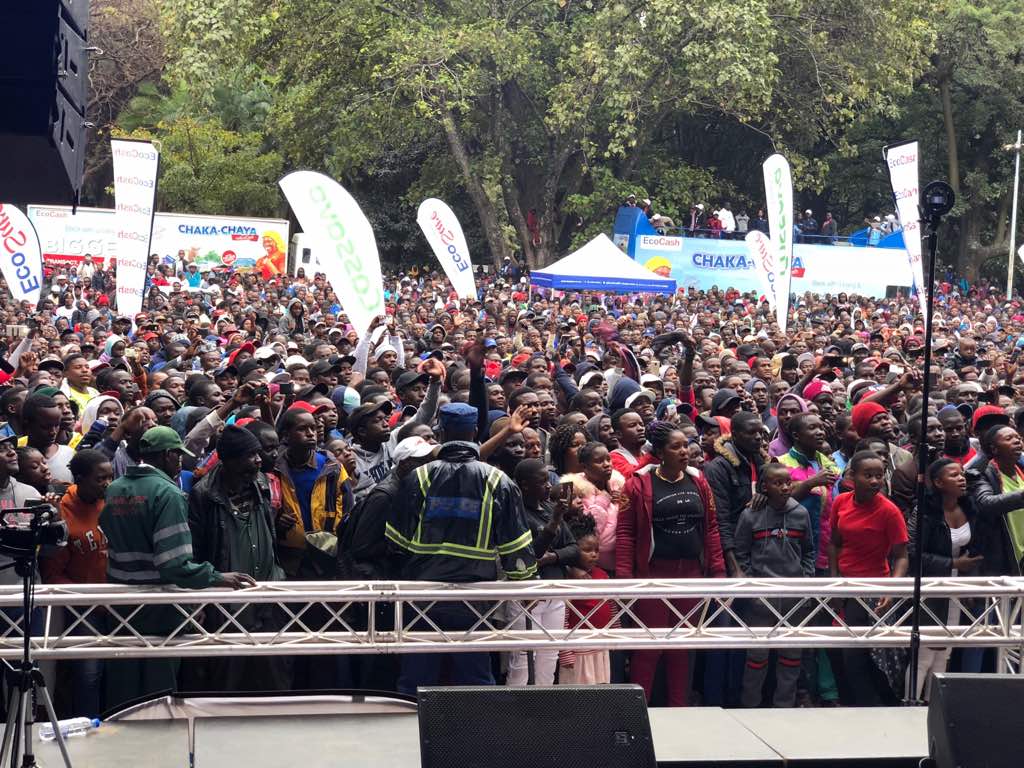 The final draw of the million-dollar ‘Chaka-Chaya neEcoCash’ promotion was held in the capital’s Harare Gardens at the weekend, drawing a bumper crowd of over 12 000 EcoCash customers that braved the cold weather to come and witness the curtain come down on what has become one of the biggest promotions in the Zimbabwe.

The 2018 edition of the promotion ran from April 8 to July 5, in the process giving away one million dollars’ worth of individual prizes to over 150 000 customers.

At weekend’s draw – the third and final public draw – dozens of lucky EcoCash customers walked away with several prizes, among them a brand-new Isuzu vehicle, won by Misheck Cephas Mupandawana, three residential stands (won by Charles Muchekwa, Tobias Matika and Chenjerayi Ndatsitsikwa), 15 cows, 80 goats, and a trip to Cape Town – which went to Manuel Khumalo and to Cassidy S. Kagore.

Speaking at the draw, Cassava Fintech Zimbabwe CEO Eddie Chibi congratulated the winners and thanked all EcoCash customers for their participation and support in making the promotion a huge success.

Ecocash is the leading mobile money service in the country, with more than 8 million customers.

“I would like to congratulate today’s winners and indeed all our winners from the previous draws,” said the Cassava Fintech boss. Cassava Fintech is the Econet business that manages EcoCash.

“I am humbled by the crowd I see here today,” Chibi continued, “and I would like to express my heartfelt gratitude to every single one of them for braving the chilly weather to be here with us today”, he said, referring to the big crowd, part of which joined the Chaka-Chaya final draw procession from the Africa Unity Square in Harare earlier that morning.

“I would like to take this opportunity to thank all of our EcoCash customers for choosing us and for transacting with us,” said Chibi, clearly touched by the public’s interest in the promotion, whose tagline was ’the more you transact, the more you stand the chance to win big with EcoCash’.

And win big they did, with prize winners distributed from different parts of the country, as far afield as Bulawayo, Kwekwe, and Mutare.

Terrence Mudangai, who was handed title deeds to a residential stand in Stone Ridge Harare, said he was delighted to win the piece of property and would keep on using EcoCash.

“I am so happy to have won a stand and I feel like it was about time,” he said. “This is really a good day for me, I accrued many points and I will continue using EcoCash” said an elated winner, one of a total of six people that won stands through the promotion.

The prizes won at the weekend draw excluded several others already won over the past three months and in the previous draws, which included EcoSure cover, grocery vouchers and airtime.

The draw was held in a carnival atmosphere, featuring popular radio Star FM DJs Phathisani ‘Chibaba’ Sibanda and KVG (Kudzai Violet Gwara), along with some leading contemporary music artistes, among them Winky D and Andy Muridzo.

Chibi said the Chaka-Chaya neEcoCash promotion would be back next year.

“Yes, it will definitely return next year – by popular demand”, said Chibi, pointing to the lively 12 000-strong crowd gathered right in front of him at the final draw event.