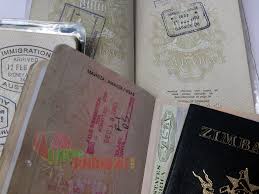 Minister Of Home Affairs and Cultural Affairs Kazembe Kazembe has warned corrupt officials at the Passport Office allegedly taking bribes to process travel documents, urging those with evidence of such corruption to come forward so that the law could take its course.

Speaking during the familiarisation tour of the passport production plant at the Josiah Magamba Tongogara Barracks in Harare yesterday, Minister Kazembe said Government is working out strategies to clear the passport backlog and increase daily production from the current 2 500 to 8 000.

“As a ministry, we remain committed to ensuring that every citizen who needs a passport gets one without hurdles,

“In this respect, Government has committed resources for the purchasing of consumables so that we clear the backlog in the first half of the year. If we are to meet our targets, we need to up our production from the current 2 500 to 8 000 a day. For this vision and thrust to be a success, you have to work extra hard in meeting the targets” he said.

Minister Kazembe described his visit to the passport production plant as an eye opener.

He said the fee to obtain a passport remains $53 although discussions were underway to review this and allow locals with free funds to pay in foreign currency.

“The challenges that we have been told are real,” said Minister Kazembe.

“However, we must also try to strike a balance because at the end of the day access to those documents is a constitutional right so those discussions are still going on and it’s a process to improve that. As of now those costs have not been increased.”