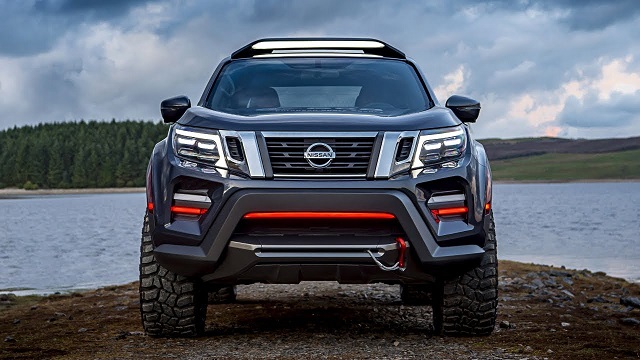 It was back in May when Nissan announced that they are launching 13 new and facelifted models for the next 18 months. One of those mentioned was the Navara, and after six months of waiting the Japanese automaker has finally pulled the covers off.

While Zimbabwe is patiently waiting for the new Navara. You can immediately tell it’s the updated version by looking at the LED lights at the front with C-shaped daytime running lights lending the pickup truck a more modern appearance.

Nissan’s design team also spent some time tweaking the front grille with the Navara / Frontier lettering etched onto the top part just so you don’t confuse it with something else. The discreetly revised LED taillights are also part of the nip and tuck, and so is the revised tailgate prominently showing the model’s designation.

From the outside, you won’t mistake this for the pre-facelift model. The entire front end gets new panels from the hood, right down to the bumper. The 2021 Navara has a bulging hood, removing the two curves by the trailing edges of the panel. They even added chrome for extra presence and bling. Speaking of bling, top-spec Navaras get LED headlights with a unique, four-light pattern.

There are some changes underneath the skin as Nissan has beefed up the rear axle and increased the truck’s payload capacity. Not only that, but the Navara has a greater bed volume than before as well as a new step built into the rear bumper to easily access the bed. Low-speed maneuverability has been improved courtesy of a newly developed steering rack, which also pays dividends in terms of steering response.

Giving the Navara a tougher look is its grille, which is larger this time around. It replaces the dainty V-Motion look for a three-bar design, taking some cues from its (much) larger brother, the Titan. Nissan wanted to make the 2021 Navara look edgier, so they also added more defined corners on the bumper. They also made the center air intake wider than last year’s model, and the apron gets a more rugged look.

The single cab derivatives will also be available with a petrol engine, Nissan says, without furnishing any further details.

Inside, it’s much like the current model, but there are a few tweaks here and there. Most noticeable is the steering wheel, which adapts the retro three-spoke design from Nissan passenger cars. The instrument cluster also gets an upgrade with a larger multi-information display. It features new graphics and more menus as well. Pro-4X versions get unique seat patterns and red highlights.

As for the engines, it’s the same as before. It uses a 2.3-liter, twin-turbocharged diesel engine in select markets, but the 2.5-liter lives on.

So when will the 2021 Navara land in Zimbabwe? There is no definite date for now, but given the strong sales here, the wait shouldn’t be that long.

During an online press briefing, Nissan SA marketing manager Kabelo Rabotho confirmed that the new bakkie is set to go into production at Nissan’s Rosslyn plant in Gauteng during the first quarter of 2021.

Another Innovative Billboard From Zimnat!
Zimbabweans Not Happy With Rolls Royce After Ginimbi Death