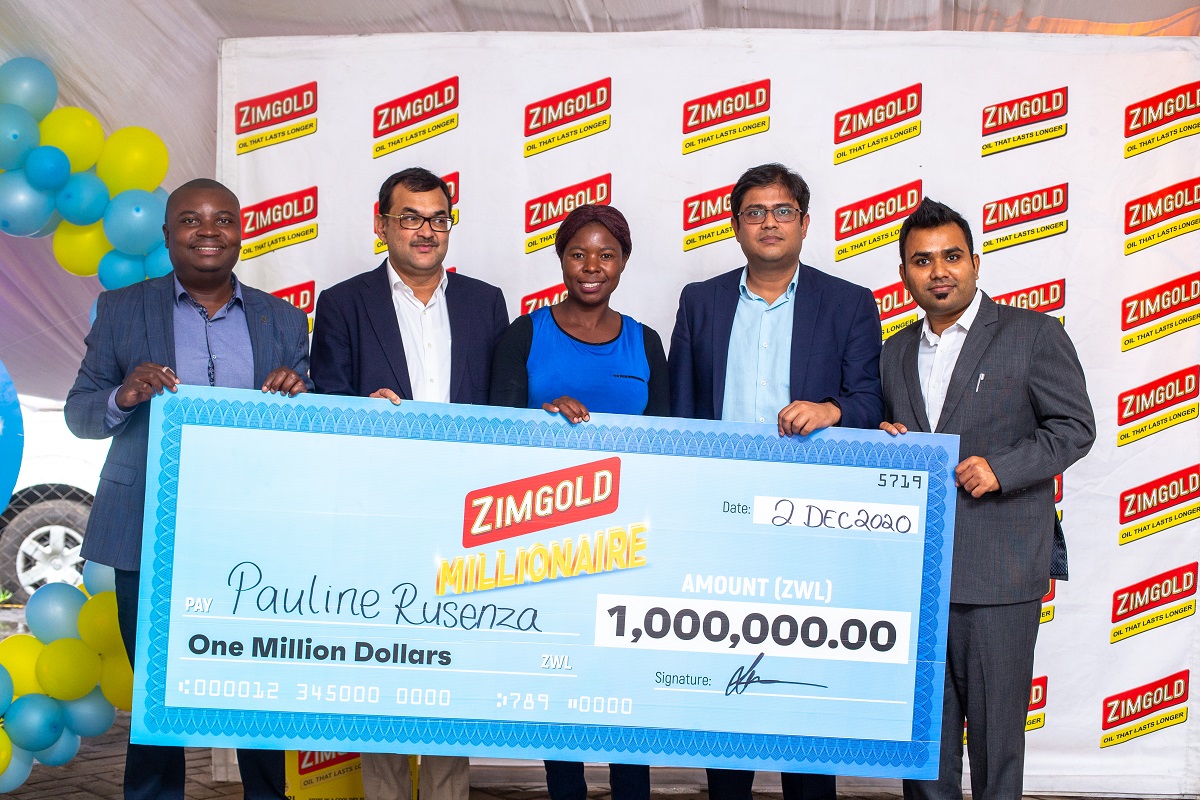 Pure Oils through its ZimGold brand has rewarded a lucky shopper with ZWL 1 million and officially awarded two full scholarships to two female students to study their master’s in engineering and technology in India. The company also donated cooking oil to Triple S Trust from Domboshava and Jairos Jiri as the company continues to plough back to society.

The awarding of ZWL 1 million caps the ZimGold Millionaire promotion, which saw more than 300 shoppers walking away with various cash prizes. The promotion started on the 2nd of October and was originally set to end on the 14th of November, but it had to be extended to the 30th of November due to the overwhelming response from customers.

The ZWL I million grand prize went to Pauline Rusenza from Concession in Mashonaland Central province.

ZimGold also officially announced the students who were awarded master’s degrees scholarships. The scholarship program is now in its 2nd year running and last year 2 male students were selected. This year 2 female students Christabel Madzinga, a University of Zimbabwe graduate, and Tsitsi Zendera a Chinhoyi University of Technology graduate have been selected and will be going to study for their master’s degrees in technology. Both students will pursue Manufacturing and Materials Engineering at the Institute of Technology Palakkad (IIT) in India, fully funded by Pure Oil Industries.

Pure Oils Head of Marketing and Public Relations Manager, Lesley Gibbons said, “Pure Oil Industries was formed with a big vision to not only make a profit but, to make a positive impact in the communities. We combine all our community welfare initiatives under one umbrella term that we call ZIMGOLD GIVERS. Each year we engage in different community programs that help benefit the masses.”

“Every year, we work with various charitable institutions responsible for taking care of the most vulnerable members of our society. This year we decided to identify, honour and assist those we call communities heroes who are making a difference in their societies. Five institutions which include Lynde Francis Trust, Harare Children’s Home, Touching Lives Africa, Triple S and Jairos Jiri were selected,” said Gibbons

“Two of these organisations, Jairos Jiri and Triple will be given 720litres of cooking oil combined. The other three have already received their share last month which they used to offer relief to needy families during the Covid-19 induced lockdown,” she said

“Although 2020 was a difficult year due to the Covid-19 outbreak, we felt that we needed to spread the love and cheer our customers. We launched the ZimGold Millionaire promotion which saw more than 300 lucky shoppers walking away with cash prizes as high as $100,000ZWL to bring back the smiles on our customers and to change their lives.

“Congratulations to Pauline Rusenza the grand prize winner. Pauline is a 41-year-old single mother of 2 daughters. She lives in Concession where she runs a tuckshop to support her family. We hope this $1 million ZWL will have a positive impact in her life.”

The company also realised the importance of education, especially in science and from last year, the invested in two fully-funded scholarships for young Zimbabweans to pursue science, technology, engineering and mathematics (STEM) in India and come back to work in Zimbabwe after completion of their studies.

Early this year, ZimGold was among brands that offered relief during Covid-19 lockdowns by giving out cooking oil, soaps, and blankets to all the frontline workers who were working during the Corona virus-induced lockdown. The goods were handed over to His Excellency, President Emerson Dambudzo Mnangagwa at a ceremony held at the statehouse.